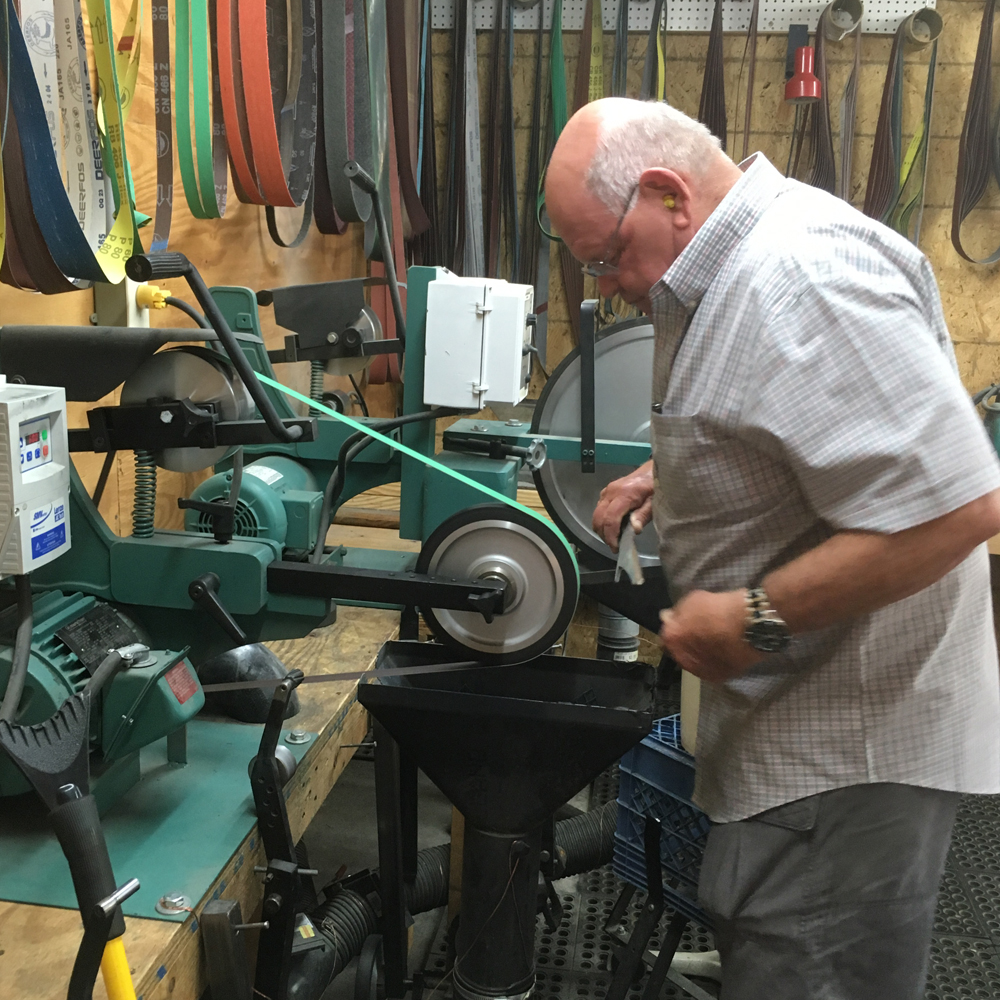 Mention the name Walter Brend around collectors of knives, swords and daggers, and smiles will fill the room.

With decades of experience hand producing highly collectable weapons, Walter is considered by knife experts to be one of the most sought after creators of hand ground knives in the world.

After living in several states, Walter and his wife moved to rural McMinn County home and soon began turning out new styles for collectors in an expanded work shop. The shop is filled with different sized belt grinders and unique equipment needed to cut and finish his one-of-a kind creations. Several machines were designed by him and built by a specialty company. Along with constantly developing new and unique knife design styles, Walter also takes special orders from collectors who have their own ideas. Buyers in other countries often seek special creations, asking for both hunting and collectable knives. Walter said his most expensive weapon created was a sword that sold for $30,000 to a collector in China.

But the current success was not always
a part of his life. Twenty years ago disaster struck.

“I was a meat cutter for 15 years, and everyone told me if you ever let the knife slip, you will cut yourself,” said Walter. “I was fast with the knife, but unfortunately the warnings became a reality. A slip with the knife happened, and after two surgeries a specialist said my hand was useless.”

He had movement, but no strength with a nerve severed. Walter had often dreamed of creating new knife styles – he grew up in the central Florida swamps where owning a knife could be a lifesaver. But with the injury that dream was impossible. He was on workman’s comp with little to live on, and no money to purchase equipment.

“My cousin said to make a knife the old fashioned way with sandpaper,” so in desperation he opted to try and file out a knife from a steel blank – to see if the impossible could become the possible.

“I started to file on this knife, but my arm would give out. I started praying to God, if it is in your perfect will, please heal my hand,” said Walter. “I started to work again, all of a sudden I was covered in sweat, and turned to go through a door. I stumbled and instinctively grabbed the door knob. Suddenly I had full strength in my hand. God healed me that morning.”

That began a new life with his dream becoming reality. Success soon followed and Walter was the first person to ever make the knife makers guild in one year.  After three years of part-time work, he began full time creating a variety of knives. He now is known in knife circles as “The king of the grinders” and a featured maker in many knife shows.

“I do some knives in 3 hours but some take 20 or more,” Walter said. He is teaching a grandson the trade, but to date will not let him work with the larger grinders. “They are too dangerous.”

One unique creation which Walter especially favors, is for the 82nd Airborne Special Forces, several members telling him those knives saved their lives in many precarious situations. The knives, called model two’s, have no markings on them to reveal who created them or who owns them.

He has also styled special knives for missionaries who go into the jungles of South America, with several admitting the knives have saved their lives from attacks by rogue tribesmen bent on killing the missionaries. In addition, he has designed specialty knives for movie and music personalities, often using rare woods with epoxy resin along with silver and gold for handles.

At age 72 Walter has admittedly cut back on the number of hours he puts in each week, but plans to never quit designing new creations – “It’s in my blood,” he said, as he stepped up to the grinder to cut a new blade.