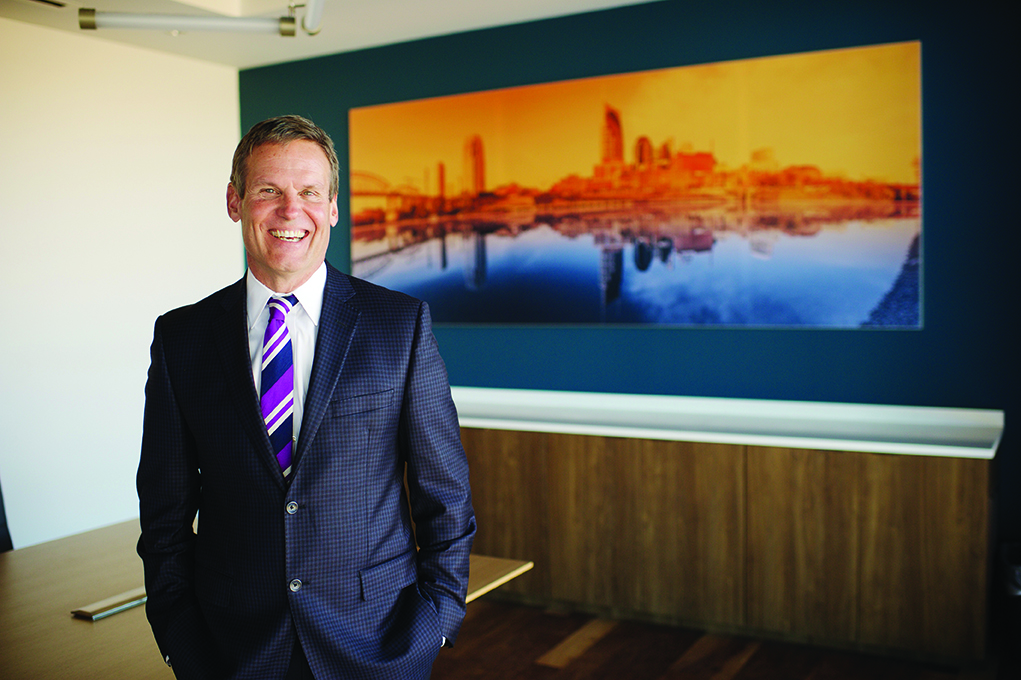 Bill Lee has always had a heart for serving others. At one point in his life, he even believed he was destined to become a missionary…until a wise man told him that perhaps the best place for him to serve, for him to make a difference, was right at home in his family business.

Bill was born and raised in Franklin, Tennessee, the son of a son of a farmer. His grandfather only had about a third-grade education, but Bill’s father and uncle went off to Vanderbilt, got degrees and came back home to start Lee Refrigeration Company. Being the older brother, his dad ran the business, and it began to take off from a small mom and pop company to something far bigger.

Things were going fine for Bill, who also went off to college before coming home to join the family business. He met the first love of his life, Carol Ann, while backpacking in Yellowstone National Park. They married and had four children – Jessica, Jacob, Caleb and Sarah Kate. On a family vacation back to Yellowstone to share the land of their youth with their kids, Bill recalls experiencing the best day of his life. The day was filled with family fun and adventure and culminated with a chance to view one of Bill’s favorite animals – mountain goats.

On that journey, Carol Ann remembered a passage about mountain goats from the Book of Job, which Bill jokingly admits is not a book of the Bible he reads very often. Job, a good and faithful servant of God, is beset by numerous tragedies to test his faith. When Job asks God, “Why me?” God responds and says, “Brace yourself like a man; I will question you, and you shall answer me…Do you know when the mountain goats give birth?” (Job 38:3; Job 39:1, NIV)

A few weeks after their family vacation, Bill was driving home from work. Lee Company was growing exponentially, his oldest daughter was off on a mission trip and, on this particular day, he pulled into the family farm to the sight of his twin boys playing as four-year-old Sarah Kate and his wife rode off on a horse. Bill honked and waved at them, never expecting his life was about to change forever.

Shortly thereafter, he found his young daughter wandering alone in a field. There had been an accident. The horse had thrown both riders, and while Sarah Kate escaped unharmed, Carol Ann was badly injured. Bill describes the experience as being like having a glass vase drop to the pavement – you look at it, and you know you can never put it back together again. Later, as he sat at the hospital with her in a coma, he pulled out his Bible and turned to the same passage she’d read to him only weeks prior and thought, “God is the same on the worst day of my life as on the best day. Only my circumstances have changed.” He did not understand it or like it, but he knew there were lessons learned and insight gained from hardships and that they would only serve to strengthen him.

One of these lessons Bill learned at Carol Ann’s gravesite. He was sitting there as the marble marker with her name on it was installed and wondered to himself what she would say if she were there with him. He knew immediately she would say there are only two things in the world that mattered to her – that she knew Him, and that anybody else in the world knows Him because of her. Bill walked out of the cemetery revitalized and knowing he needed to apply this principle to the rest of his life, no matter what might come.

Bill took a break from his company to focus on being a single dad, but tragedy was far from over. One day, his oldest daughter drove home from school in the middle of the day, took a gun and shot herself in the head. Bill found himself traveling down the same road to the same hospital where his wife had died, the helicopter carrying his daughter flying overhead, and he had no idea if she would survive.

Thankfully, his daughter did survive, and what could have been another great tragedy actually helped mend holes in their relationship. In fact, Bill is pleased to say he has a remarkable relationship with all his children – not in spite of the struggles they faced, but because of them.

Bill eventually returned to the family company, making tough choices and through staunch determination, he repositioned the Lee Company for success to where they now have over 1,200 employees.

In addition to running a successful business and 1,000-acre cattle ranch, Bill has also been heavily involved in the community. He has mentored at-risk youth through YCAP and inmates through the Men of Valor prison ministry, and he has seen how good leadership is so desperately needed in education, criminal justice and workforce reform. Though our state has had powerfully great people to lead it in the past, Bill truly feels that Tennessee can be not just a great state but a leader in the nation. All we need is the right man at the helm.

This is where Bill hopes his heart for serving others can someday soon serve the State of Tennessee. Just like the greatest leader of all, Jesus Christ, he believes what we need is someone to serve our state. Someone with not only the proven leadership skills, but the heart and hope to take Tennessee to better places. When tragedy repeatedly struck Bill’s life, he could have shaken his fist up at heaven or given up, but instead, his heart and hope only grew. Now, he is not only a successful businessman and doting father and grandfather, but he found his second great love in his wife, Maria.

On the RV Bill and Maria recently took on the campaign trail, hitting 95 counties in 95 days, they printed Psalm 71:14 – “As for me, I will always have hope.” Bill’s never-ending hope and devoted reliance on his faith have helped him persevere through hardships some of us could never imagine, but it has also forged him into exactly the sort of leader who can not only bring hope, but spread hope, throughout Tennessee.