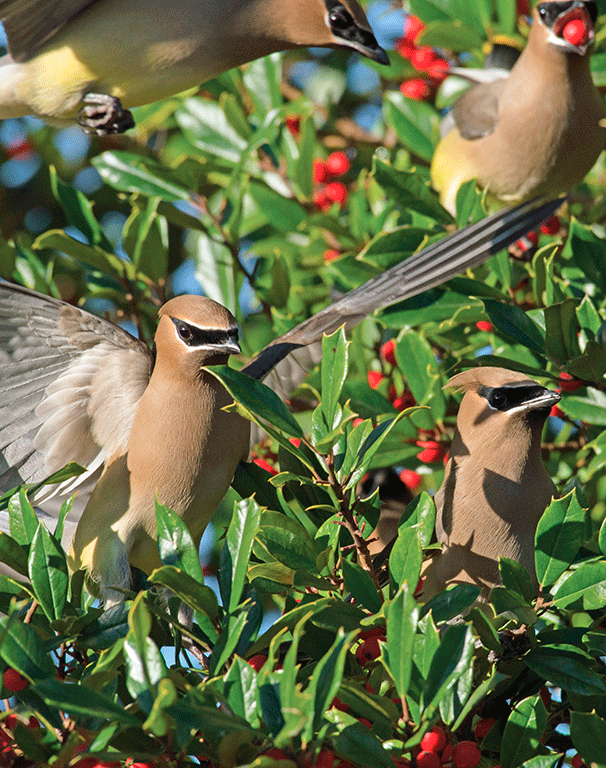 Now is the time to recognize our native holly, Aquifoliaceae. The female sets berries in the fall, and birds will enjoy this feast through the coming winter months.

The height of American holly, or Christmas holly, ranges from 25 ft. to as tall as 60 ft. The stout, stiff branches of this pyramidal evergreen bear dark green, non-glossy, spine-tipped leaves. Be careful: these hollies can scratch. New growth finally pushes off the old leaves in spring. Bright red berries occur on the female plant only. A shorter, multi-trunked form may grow in lower-light situations. The bark is a light gray color.

The evergreen fruiting branches from wild and planted trees are popular for Christmas decorations. Many improved varieties are grown for ornament, shade and hedges. You must have both a male and female plant to have berries, or at least have the opposite sex growing wild somewhere nearby. The male must be the same holly species as the female and bloom at the same time. This is a very slow-growing tree. The whitish, fine-textured wood is especially suited for inlays in cabinetwork, handles, carvings and rulers, and can be dyed various shades…even black! It has been used for piano keys. Many kinds of songbirds, gamebirds and mammals eat the bitter berries of this and other hollies, but the fruits are poisonous to humans.

The American holly’s growth habit is densely pyramidal with branches to the ground when young. With age, the plant is more open and irregular. I have one that is over 45 years old, and it is around 25 feet tall. It was already on the farm when we moved here. I cannot believe how slow it has grown, and it is in full sun. No wonder the wood is so dense!

The female flowers are a dull white, and the berries are a dull red. Fruit matures in October and persists into winter. Even though this plant is not as showy as our new holly cultivars, it is a native plant and has evolved with the wildlife in the area. Birds recognize the berries immediately.

Cedar Waxwings are a favorite of many birders and backyard naturalists. With their fuzzy-looking crests and sharp color accents, they’re such dapper-looking birds. I had a photographer tell me that waxwings are the prettiest of all birds. I totally agree. A large flock of them picking through berries is always a joy to watch.

But what’s in a name? Why is it called a waxwing? That’s pretty simple: Cedar Waxwings really have wax wings. The bright red, visible on the wing feathers, is actually a waxy red secretion. Interestingly, the red appendages of Cedar Waxwings increase in number and size with a bird’s age: individuals with zero to five waxy tips are presumable immature birds, while those with greater than nine are thought to be older.

Individuals within these two categories tend to associate as mates. Pairs of older birds (those with greater than nine waxy tips) nest earlier and raise more chicks than do immature birds, suggesting that this plumage characteristic is an important signal in mate choice and social organization. Cedar Waxwings specialize in eating fruit, an interesting adaptation among North American birds. While we think of many birds as dining on berries, in reality, berries are only a small portion of their diets. Cedar Waxwings can exist solely on berries for months.

There are more than 1,000 cultivars of American holly. If you are planting hollies, you need one male for every three females. Early Americans had a great deal of superstition about hollies. It was believed that planting hollies near buildings would provide protection from witchcraft and lightning. In Tennessee, these hollies also go by the common names of Christmas Holly, Yule Holly, Prickly Holly and Evergreen Holly.

I have several native hollies on the farm.  The American Holly outside my dining room window had gone unnoticed until last year. I just happened to be walking by when I saw movement out of the corner of my eye.  The tree was alive with birds.  At least 35 birds were voraciously eating the berries. Within 10 minutes, all the berries were gone, and so were the waxwings; it was magical.