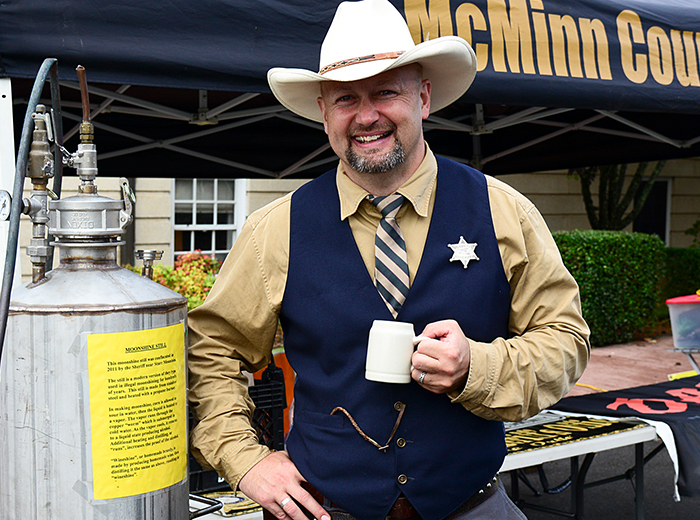 Joe Guy has established a reputation in Southeast Tennessee as an author, historian, and law enforcement officer.

He is an intriguing man with a quiet, confident, and competent presence. When a reader asked me to do an article on him, I jumped at the opportunity to find out …what makes Joe Guy tick.

Joe Guy’s descendants moved to the Burger Branch Community in McMinn County, near the Monroe County line, in 1830. Joe’s ancestors never left there, and Joe and his family live there still.

As a boy, when his peers were playing, he was sitting at the feet of his elders. “I loved listening to old people talk…it seemed as if everything was much more interesting back in their day.” He also collected Native American artifacts and rocks that were abundant in the area, and kept them in a box under his bed. He liked to think about the hands that used the tools and what the people must have been like.

A storyteller at heart, Joe began to write down the stories told to him by his grandparents. At first he wrote to be able to remember, but as time went on he began to write about the tales his grandparents told from the perspective of the person that the story was about, whether it be a tale of tragedy or heroism. It never ceased to amaze him how people today make fundamentally the same mistakes as those who came before them. “The Bible says there is no new sin, and that about sums it up”, says Joe.

Joe Guy has spent untold hours combing the hills, graveyards, abandoned houses, and the numerous historic archives available in McMinn County, to obtain documentation and photographs to confirm or dispute the tales told by his elders. He was often accompanied by his boys, Brady, Jackson, and Will, but always accompanied by his wife, Stephanie. “I couldn’t have explored my historic interests without Stephanie’s support. She has accompanied me down country roads, taken photos, and spent an enormous amount of time in waiting rooms of archives while I explore historic documents. In return, she always gets a shopping trip…seriously, she is a great partner – priceless.” His research has resulted in three nonfiction books on Southeast Tennessee, the latest being The Hidden History of Southeast Tennessee.

I wondered how someone with such a passion for history and writing ended up in law enforcement.

“I am a third-generation police officer. My grandfather was a well-known officer in Etowah, and my dad was a deputy sheriff and also worked for the Athens Police Department.  It was inevitable that I would follow in their footsteps.”  Joe Guy is currently the Sheriff of McMinn County.  Ironically, his career in law enforcement further built the foundation and reputation of Joe Guy the writer.

Early in his career, Joe answered a call and had the terrible experience of having a three-year-old child die in his arms as he worked to resuscitate her. The family was crying, demanding that she be saved, but there was nothing he could do. It was too late.  Joe had serious Post-Traumatic Stress Disorder (PTSD) following that incident. His oldest son was also three, and Joe just kept seeing the little girl’s face when he looked at his son.  He wrote the tragic story in third person to remember it, and realized that the writing of it was cathartic, releasing the pent up tension and emotions that haunted him.

“In law enforcement not a lot of debriefing goes on. So we talk to each other, relating our experiences – some funny, and some not so funny.”  Firefighters, EMTs and  deputies shared the highs and lows of their work days with each other. Joe began to write, not only about his encounters, but composite renditions of stories told by his peers. Responders to wrecks and other situations appreciated seeing their experiences incorporated into Joe’s writings. This was the beginning of Beyond the Blue Line, a collection of real life experiences of first responders. Initially it ran as a column in The Daily Post-Athenian, but eventually Joe published the collection as a book.

Just as his role in law enforcement has enhanced his writing career, the reverse is also true. Joe’s steadfast search for the hidden history of our region has given him knowledge and insight into the people he serves. He knows who is related to whom, and where they live. And often, what their issues are. Knowing the people you serve is a great asset in serving, bonding, and communicating well with them. “I know the people of Southeast Tennessee, and it helps me to be a better sheriff. I would not want to be sheriff anywhere else.”

“The lack of this kind of bonding is a recipe for disaster as we’ve seen in Ferguson and Baltimore…It’s easy to blame law enforcement, but the big picture is that it is complete failure on everybody’s part.”  When the community doesn’t get involved in local government, and law enforcement doesn’t reach out to communicate well with the people to let them know what they do, polarization and misunderstanding occur.  All sides need to work more closely together and know where each other is coming from to avoid the kind of problems that have been happening in our nation.