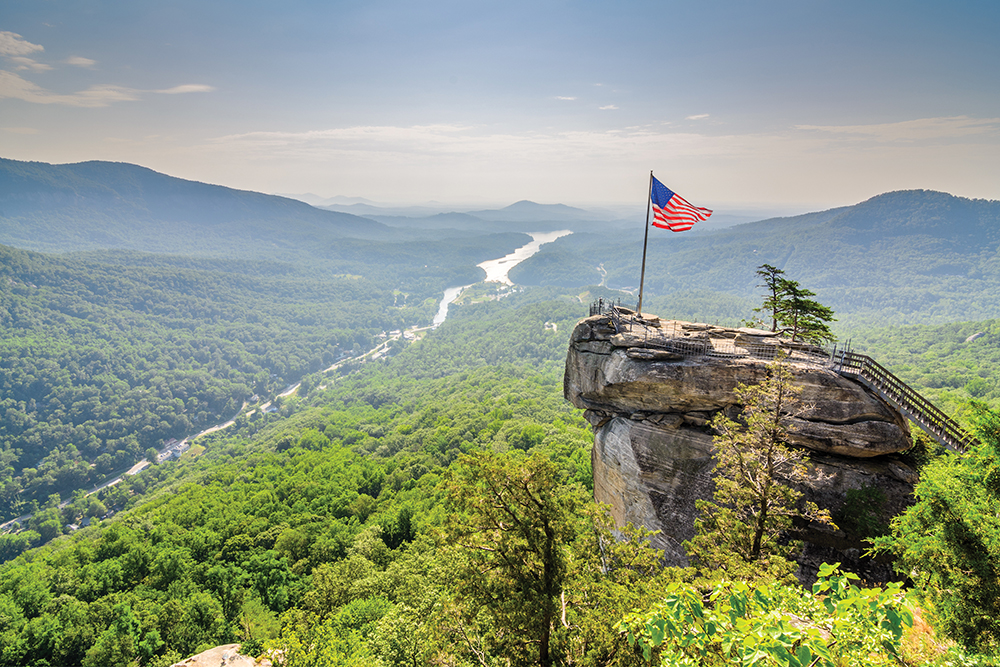 Today, reaching the top of Chimney Rock takes driving up a three-mile winding road to a large parking area, followed by climbing 500 steps or riding the elevator to the top.

The reward, on a clear day, are the 75-mile views overlooking Lake Lure and the Hickory Nut Gorge. The adventure took on a whole new meaning in 1956 when a fast driving visitor simply asked, “Hey, can we run up that road?”

Chimney Rock Hill Climb was created. The smell of fuel would fill the air and the loud engines roared with tires squealing, as drivers raced up the narrow winding road in less than two minutes. The road that rose from 1,100 to 2,200 feet above sea level with 13 hairpin turns always lined with spectators. What started as just one man’s adventure became the signature event for the Sports Car Club of America; even a few NASCAR drivers took it on in the latter years of the race. In 1995, despite the fact no one had ever been seriously injured, the growing attraction of visitors and liability concerns ended the event. It is certain that every race car driver who attempted or was crowned “King of the Hill” will never forget the Climb.

Chimney Rock at Chimney Rock State Park has been a tourist destination in western North Carolina since a simple stairway was built to the rock’s summit in 1885. In 1902, Lucius B. Morse of Missouri bought the site, and the Morse family developed park facilities in 1916. The attraction included a tunnel and elevator to the rock summit, a nature center and a network of hiking trails to geologic points of interest including the 404-foot-tall Hickory Nut Falls. On May 21, 2007, the 1000-acre Chimney Rock Park was purchased by the state of North Carolina for $24 million from the Morse family, and Hickory Nut Gorge State Park became Chimney Rock State Park.

As one of North Carolina’s newest state parks, Chimney Rock brings the best of the mountains together in one place. Standing atop the 315 foot Chimney Rock, the view is stunning. Visitors enjoy scenic hiking trails, guided rock climbing, live animal education programs and ancient geological history. The Park’s highest point at 2,480 feet, Exclamation Point, can be reached via

The stunning scenery was featured in the 1992 blockbuster, The Last of the Mohicans, and the adjacent Lake Lure was the filming location for the 1987 pop culture classic Dirty Dancing.

Chimney Rock, North Carolina, is a year-around destination, the perfect day trip or weekend getaway; rent a lake house, take a boat tour, hike a trail or attend a festival. And while the racing is not acceptable anymore, a relaxing, scenic drive on the country roads is highly recommended.

Chimney Rock Village has an old-time feel due to locally owned businesses that occupy historic buildings full of character and flair. Walk along Main Street to shop at stores with one-of-a-kind finds including Appalachian crafts, unique souvenirs of the area. Dine at a riverside table, try a local craft beer or savor a glass of wine. After visiting Chimney Rock Village, just head down main street, take a right and the road will lead you to Lake Lure.

Lake Lure is one of the most beautiful man-made lakes in the country, nestled in the foothills of the Blue Ridge Mountains of North Carolina. This is a must do for getting a new perspective to the incredible scenery of the area. From atop Chimney Rock, you viewed from above, and now, surrounded by lush mountaintops and sheer granite cliffs, the “look up” is breathtaking. Bet the song, “Time of My Life,” from Dirty Dancing starts playing in your head. In the fall of the year, Lake Lure invites you to Have the Time of Your Life and relive the moments of the classic film. You can experience movie-inspired dance, music, arts and entertainment. There is even a lakeside screening of the film. Venture out into the lake; attempting the infamous lake lift is encouraged but watching others trying the move is even more fun.

Chimney Rock at Chimney Rock State Park is an international outdoor destination in the Blue Ridge Mountains of Western NC, attracting visitors from around the world. Recognized as one of the Southeast’s most iconic outdoor attractions, Chimney Rock is located 25 miles southeast of Asheville on Highway 64/74A in Chimney Rock, NC. Visiting Chimney Rock and Lake Lure from Knoxville will take less than 3 hours; it is approximately 141 miles. But you won’t mind it. Driving through western North Carolina is an adventure in beauty and worth every mile traveled.