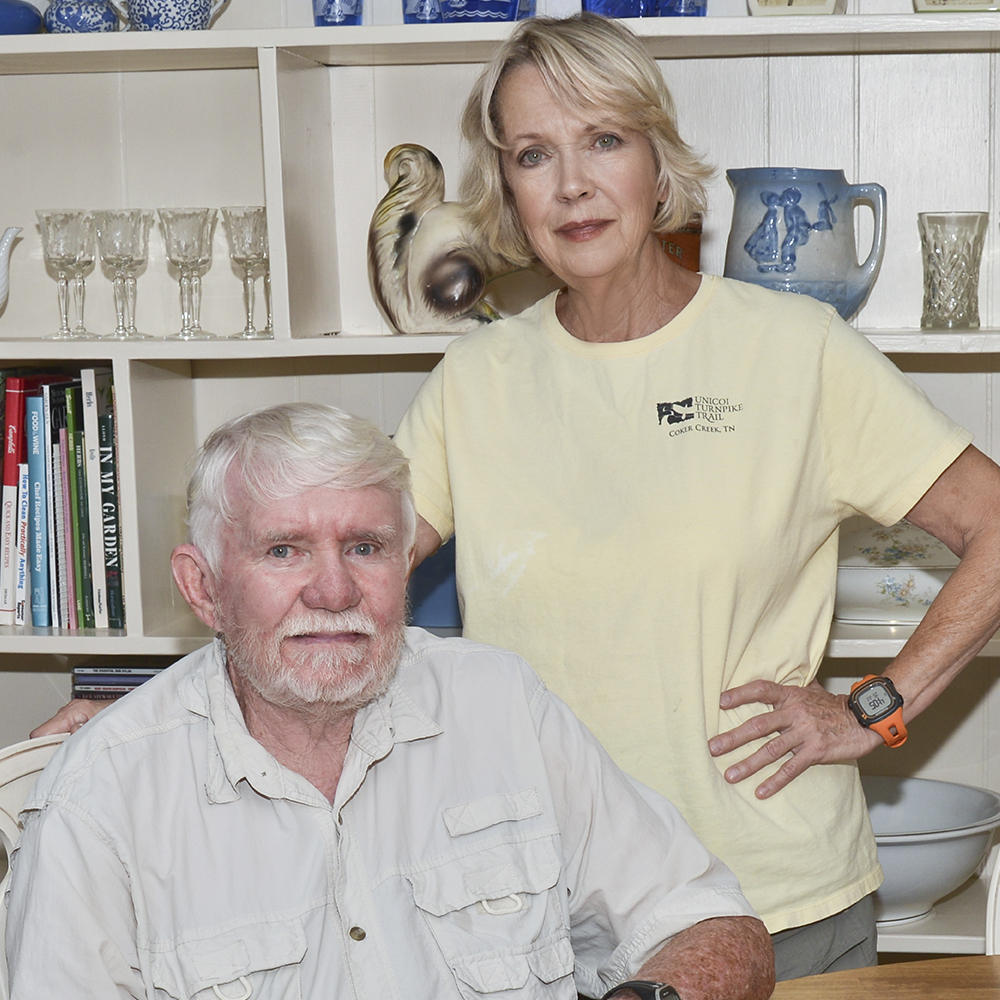 Linda Caldwell, Tennessee Overhill and Appalachian History are synonymous in the minds of most people from our region.

I was very excited to have the opportunity to interview someone with so much knowledge of the place I have considered home for over 30 years. My first big surprise was that Linda isn’t “from here,” either!

Linda Caldwell was born and raised in Narrows, Virginia, so named because it is located where the New River (one of the oldest rivers in the world) cuts through the rugged Allegheny Mountains in western Virginia. Her husband, Jim, was raised on a farm on the banks of the New River, and the two were high school sweethearts. They eloped in 1960 during Jim’s homecoming at Emory & Henry College. Jim joined the Air Force soon after, and the ensuing years were adventurous and challenging.

The Caldwells were first stationed in Montgomery, Alabama, in 1961 and 1962. It was a time of civil unrest, marches and protests and the Cuban Missile Crisis. Says Linda, “A very interesting time to be there.” One upside was Jim’s time playing semi-pro football for the Montgomery Confederates. Next stop, Anchorage, Alaska, in 1963. Linda was a stay-at-home mom until Jim got hurt ice skating and was unable to work his second job for a few months. Linda’s first job as a married woman was taking Jim’s place delivering bundles of the Anchorage Daily News to paper carriers to deliver. Her toddler daughters, Ann and Paige, rode with her. Linda will always remember Alaska! They were there during the great Alaskan earthquake. It was followed by a month of severe aftershocks, so Linda and the girls returned home to Narrows before Jim’s tour of duty was finished. It was quite the trip. They rode with a retiring Air Force man over 1,200 miles of dirt road on the Alaska Highway then across the US for a total of eight days. He took them as far as the Chattanooga Choo Choo Depot, where they boarded a train for home. Jim stayed in Alaska until 1965.

Fast forward to 1969, Etowah, Tennessee. Jim was recruited by Beaunit, an industry that made yarn for carpets, to set up a new manufacturing process. The plan was to be here five years and then move to the Research Triangle Park area of North Carolina, which was the place to be in the 1970s for a career in research and development.

When the realtor showed them the home they are still in, Linda didn’t like it. Jim said not to worry, though, because they’d only be here five years…that was 46 years ago! Just so you know, they stayed here by choice, although Jim didn’t stay at Beaunit and instead went to work for the railroad. Not long after moving to Etowah, Wes was born, and Linda was again a stay-at-home mom until Wes went to kindergarten.

I wondered how one goes from a stay-at-home mom to practically creating Tennessee Overhill, a huge undertaking that has successfully driven tourism to this region of Tennessee. Right place, right time? Hand of God? The hard work and dedication of a particularly savvy people person? How about all three.

Linda worked for a few years as an insurance agent and enjoyed it. Thank heavens when the part-time position for Director of the Etowah Arts Commission opened up, she took it. The EAC did a great job of promoting Etowah and the arts, eventually outgrowing its space. They moved to the upstairs of the L&N Depot rent-free on the condition they continue to provide public art programs. In the late 1980s, the state library & archives asked EAC to hold a “copy day” for people in the area with historic photographs. Says Linda, “We expected just a few folks, but dozens lined up with the line extending outside and down the sidewalk.” EAC realized at that point that something must be done about Etowah’s history. Linda turned to Humanities Tennessee for grant money to fund the project. The year-long community effort resulted in a book and an exhibit in the Depot. What happened during this effort was that they got really interested in their neighboring communities, such as Englewood and Ducktown that were also working on exhibits. The idea of combining tourism with history was born. Right place, right time. The other contributing factor to Tennessee Overhill’s success at this point was that Linda became aware of the fact that Heritage Tourism Initiative was looking for four pilot projects in four different states.  The only thing was that the application and all its requirements were due in two weeks’ time. The Etowah Arts Commission applied for the three counties to be one of the pilot areas and created Tennessee Overhill as a temporary branch of EAC, providing its first funding and creating an advisory council with members from McMinn, Monroe and Polk Counties.

Linda got on the phone and in the blink of an eye had people on board in three counties and got it done…and, they were selected. This meant $60,000 to $70,000 per year worth of free training.  In turn, she had to maintain an office, phone and person and had to pay for it. Three County Mayors pledged financial support, and Etowah provided free rent. Tennessee Overhill became a separate entity from EAC and was in business!

The goal of the three-year pilot project was to demonstrate that it was possible to marry preservation, arts and business to develop sustainable tourism, not only for the economic impact for the region, but as a catalyst for preservation of the region’s enormous environmental assets and unique history. They are forever grateful to the Heritage Tourism Initiative for the opportunity to provide workshops on several important aspects of the huge undertaking and to have been able to learn together with people from three counties.

Linda is proud of the partnership that came together and the open-minded, creative and supportive people that have served on their board. She would be remiss in not mentioning how important the USDA Forest Service, the National Endowment for the Arts, Humanities Tennessee, Tennessee Department of Tourist Development, SouthEast Tennessee Development District and the Tennessee Arts Commission have been to the success of Tennessee Overhill. They started out with a budget of $21,000. When Linda retired in 2013, their budget was $300,000, and the Overhill owned 47 miles of railroad that is home to annual train excursions.

Linda retired to pursue the arts she enjoys, such as painting and printmaking. However, much of the time her easel, paints and brushes sit idle in the glassed-in porch Jim remodeled for her studio. Too many organizations know of her ability to find and successfully apply for grants. There will be time for painting later. Maybe.