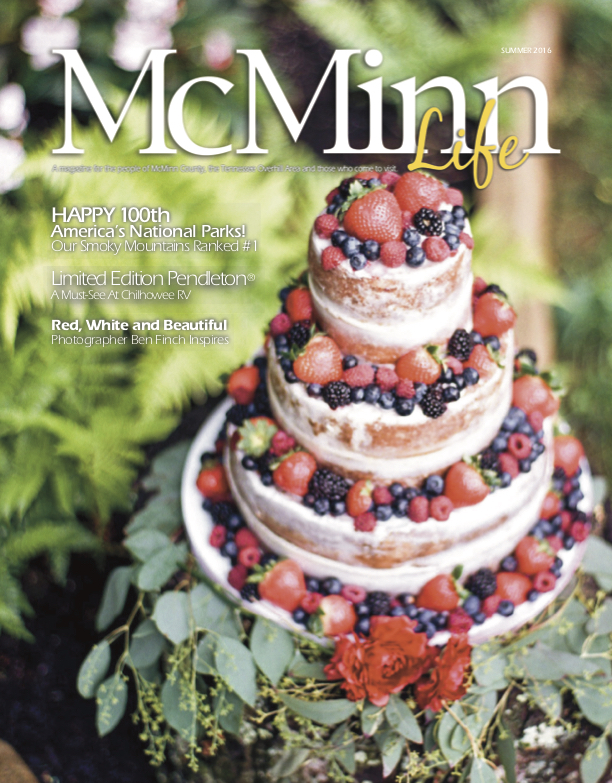 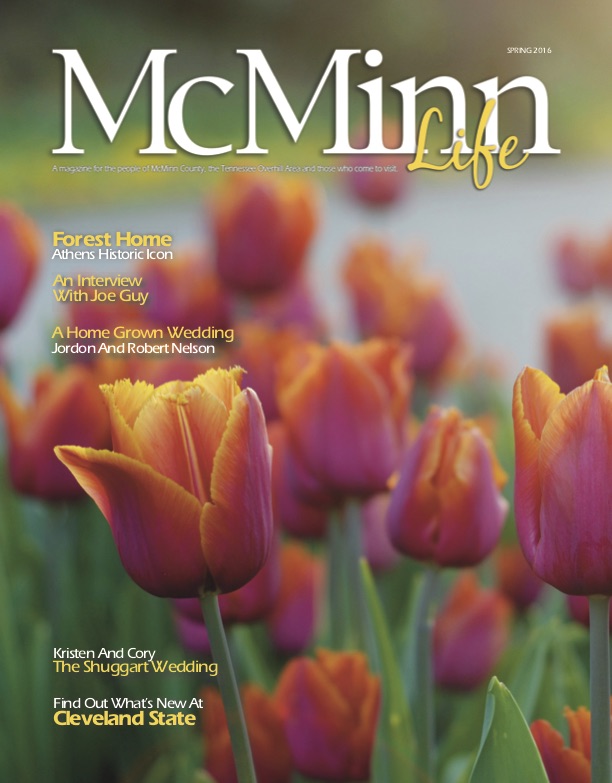 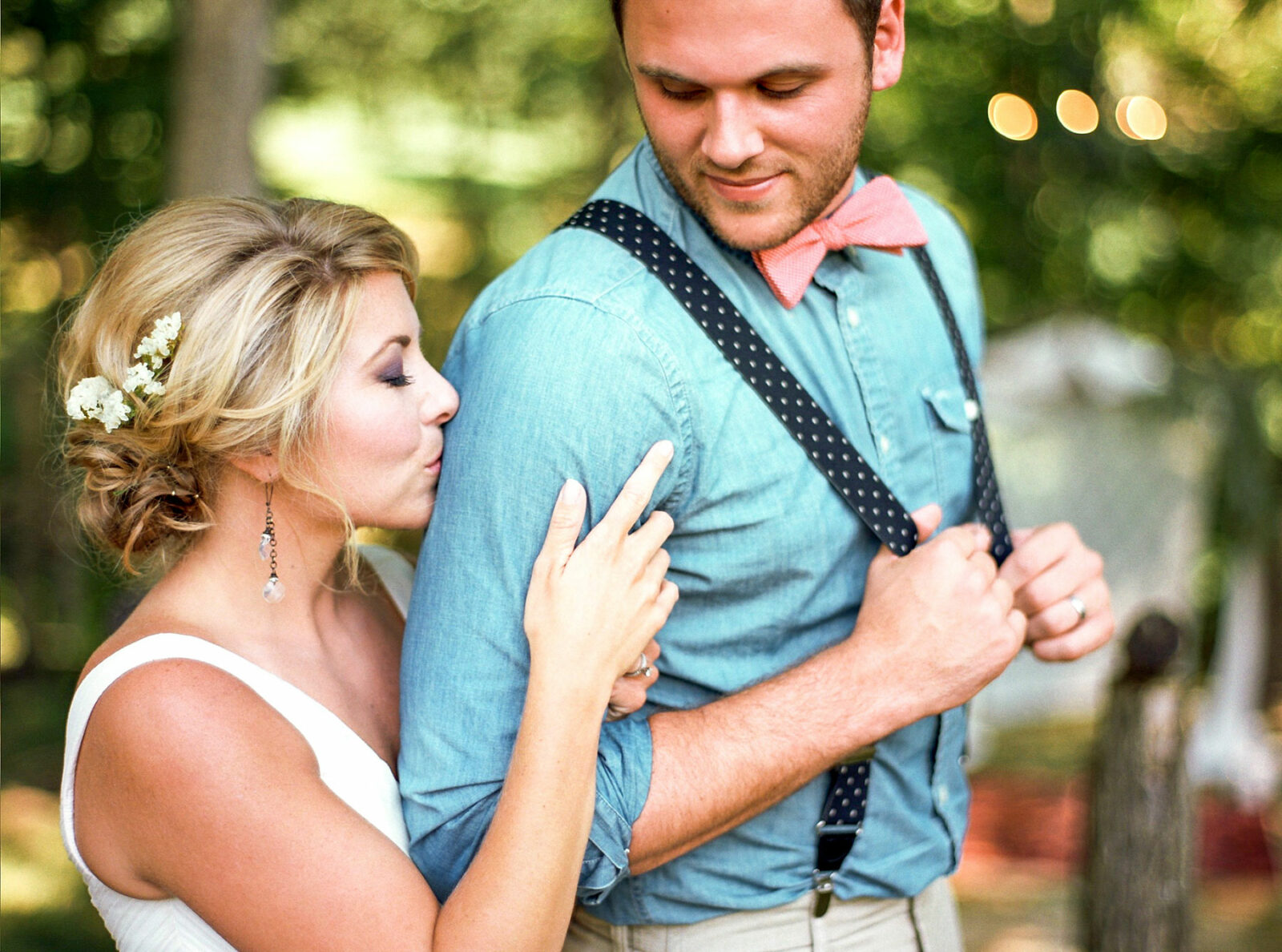 Ben Finch of Finch Photo recently collaborated with Castleton Farms to create an amazing wedding photo shoot inspired by the 4th of July. Castleton Farms, established in 2009, is the premier wedding venue in East Tennessee.

The photo shoot took place at the Woodland Gardens. With a stone aisle surrounded by tall trees strung together with lights, it is the perfect place to say “I do”! Ben shot Rachel wearing a beautiful, sleeveless gown accented with an ornate, jeweled belt. Her style was created by Rachel Ridner and Kelly Schmid, and her hair was styled by Bangs and Blush.

The couple kissed under a natural wooden arbor decorated with white fabric and surrounded by lit candles. Sarah’s bouquet of red peonies was matched by the flowers hung over the arbor, arranged by The Katelier Florist.

The shoot continued with several pictures of the couple with an American Flag, facing each other in a vintage rowboat, and sharing a kiss on a beach bicycle. For the inspirational reception, Cakery Bakery featured a tiered cake decorated in strawberries and blueberries, paired with ice cold lemonade in mason jars.

Bliss, Coldstream Market and All Occasions Party Rentals collaborated to turn Woodland Gardens into a patriotic reception, including a cozy couch between antique wing-backed chairs. Carnations sat in vases of glass bottles and refreshments were served on a reclaimed wooden table. Creative invitations were provided by Liddabits Products.

Ben’s children, Brennan, Knox and Molly Finch, are featured with Rachel and Joey, and added some family fun to the inspirational shoot. Through the collaboration of Finch Photo, Castleton Farms, and many others, the photo shoot was a big success! 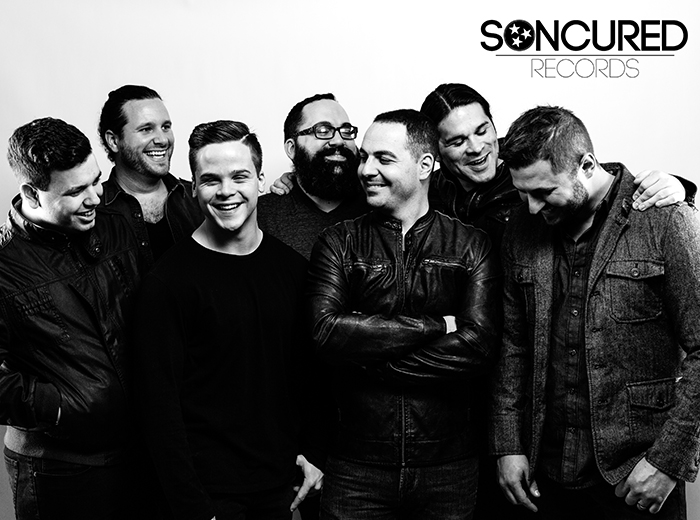 An ambitious idea was born nine-years    ago by a group of McMinn County    musicians who believed they could make a difference in musical ministry. The four planned, prayed, created and practiced, and after a time, the band Calling Glorywas born.Today they are making their mark in Contemporary Christian music with a grammy ballot appearance, musical creations regularly played on Sirius Radio’s The Message, Klove, Air 1,  and other venues, along with downloads available on Amazon, Pandora, I-tunes, Google Play and many other sites. Currently they have more than 130,000 fans.Band members include lead vocalist and rhythm guitarist Dana Potvin, lead guitarist Jones Beene, Drew Crabtree on bass, and drummer Rico Acosta.Calling Glory’s busy schedule encompasses playing conferences, churches and festivals throughout the U.S. and as far away as Nicaragua. The trip to Nicaragua presented a challenge with only a few weeks to receive passports, book transportation and prepare logistics.“We didn’t know what to expect in Nicaragua,” said Dana. “We thought we might be playing for roosters.  We arrived at an old baseball stadium in a small town and suddenly they were bussing in thousands.”  More than 10,000 attended the two day event, with hundreds being saved and receiving prayer.  Calling Glory will likelybe returning to that country soon for another event.The bands set list depends upon the venue, according to Dana. He said they are capable of a full concert of originals, or a mix of current Contemporary Christian songs. Band members are also involved with their local church worship teams.The group has released a number of projects, with several making top charts in the music industry. Currently they are working on their latest creations at Full Circle Music in Nashville.  Studio owner and producer Seth Mosely is directing the recordings.  He has produced such groups as For King and Country, Newsboys, Francesca Battistelli, and Mercy Me.  Mosely is a grammy and Dove Award winner. Calling Glory also had previous projects produced by Jason Hoard at his Georgia studio.The creative side of Calling Glory often entails meeting at one of their homes, bouncing ideas off of each other, and slowly putting together their next release.“We like to think of ourselves as not just a band but a worship band, said Drew. That means using their own ideas and creations to draw listeners to Christ.  Jones added, “We pray that through our music, listeners will be challenged to consider the cross and the sacrifice made for them.”Their single, “I Am With You” was the bands first song eligible for a Grammy, as best Contemporary Christian Song of the Year.  It reached number 44 on the Billboard Christian Chart.  Other songs have hit as high as 24 on the charts.During off times, the band members work their regular jobs. Jones is a Vice-President  at Athens based Plastic Industries, where Drew is a computer expert. Dana is a music director at Dalton First United Methodist Church, and Rico spends his off hours as a Nashville musician.And while their current success has reached far beyond their original goals,  future plans may include larger and longer tours. “That probably will be our next step by the grace of God,” said Dana.Currently the band’s releases are under the “Soncured” corporate record label. “Soncured is not a huge corporate record label,” said Jones, who is owner of the company.  He said the label is entirely self-funded and currently has other artists, including Tanner Clark, Josh Gilbert, and new artist Asher.  “At our core we believe that Holy Spirit inspired music has the ability to change lives, and our mission is to find and promote unknown Christian artists who otherwise might never have the opportunity to share the message God has given them with the world.”With thousands of fans, songs hitting the Billboard charts, and huge events on the horizon, band members make it clear that fame is not the goal of Calling Glory. Their goals are to tell the world about Christ through testimony and music.  And those who follow their travels know that will be the key to their future success.“A big issue in our lives and the whole point of the band is that we always make space for worship,” Dana said. “And to tell audiences how Christ has made a difference in our lives.” 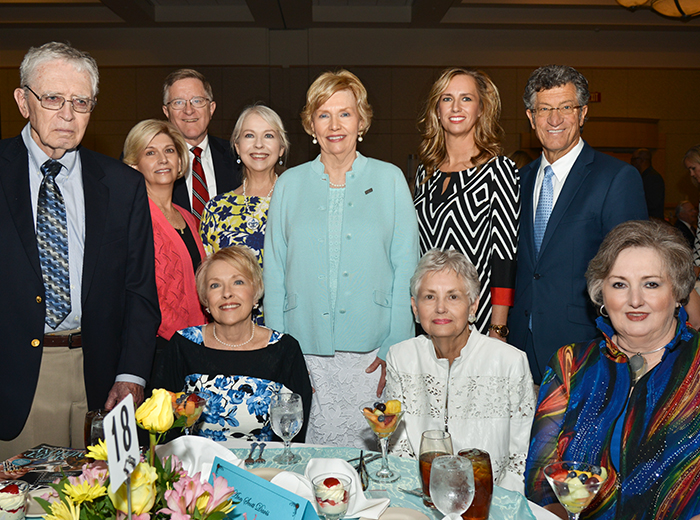 Ann Scott Davis is a remarkable woman. At a time in her life when she expected to be watercolor painting and gardening, Ann tirelessly works two jobs and is making a lasting difference for people in our community. I wondered, “What groundwork inspired Ann to be so motivated and to give so much of her time and talents?”

Ann’s response to my inquiry was immediate. “It was the way I was raised. Both of my parents set great examples of how to treat people, but my mother in particular spent a lifetime of helping those less fortunate.” Ann’s parents are the late Charles “Shy” Scott, a World War II veteran who piloted B17 bombers, and Lola Scott, a retired schoolteacher, who was awarded the statewide E. Harper Johnson Retired Teacher of the Year award from the Education Association of Tennessee. Lola, now 99, taught high school equivalency classes until her vision began to fail when she was 89. Ann’s daughter continues the tradition of giving back to make the world a better place. “I am very grateful that my daughter Whitney, who lives in Nashville, has taken up the practice of giving back to her community through work with the homeless and those affected with mental illness and substance abuse.”

Ann’s career didn’t exactly turn out as she had planned when she was a child. “I was horse crazy and wanted to be a jockey. When it became apparent that I was way too tall, I decided that I wanted to marry a jockey! As I became older and realized I needed a sensible course for my life, I decided to take some business and computer courses at Tennessee Wesleyan College.” While employed in the business world, Ann spent her spare time volunteering at the Athens Area Council for the Arts and at McMinn County Living Heritage Museum. In 1987, she became the first full-time executive director of the museum. During her tenure, the museum outgrew its first location in the Old College building on the TWC campus and moved to the old McMinn County High School facility on Madison Avenue. In 2007, after twenty years, Ann retired to care for her terminally ill husband, Stan.

How then, did politics enter the picture? “I always had an interest in politics. My father was on the City Council. My uncle was Mayor of Athens and another uncle was a judge. One of the last things Stan told me was that I needed to run for the City Council.” As a recent widow, Ann traveled some, started back into watercolor painting, and continued teaching Sunday School (for almost 30 years at First Baptist Church), but something was missing. “I really wasn’t giving much to my community. My favorite saying is, ‘Volunteering is the ultimate exercise in democracy because each time you volunteer you are voting for the kind of community in which you wish to live.’ I knew I had to do more.”

In 2008, Ann made a successful bid for a seat on the City Council. Following her second term in the City Council, Ann’s hard work and dedication was recognized by being named Mayor of Athens, a position she currently holds.

Ann’s ability to coordinate an initiative and succeed in its implementation is due in great part to her strategy. “I approach things project by project. I need a goal in front of me all the time.” One major accomplishment has been the effort to help develop a skilled workforce to meet the needs of area industries. She worked with Stewart Smith at Tennessee Technology Center and other volunteers to develop seven initiatives to structure the process. Their ongoing efforts since 2009 have been so successful that they both were invited to speak to State and National workforce boards in Nashville and Washington, DC to share the program that has worked so well for Athens and McMinn County. Her most current project has been the implementation of Main Street Athens, a program of the National Trust for the revitalization of downtown Athens. “Working with Patti Greek and Missy Ford of the Downtown Business Association was a great collaboration, and it has been very gratifying to see the excitement around the project. I have been blessed to work with so many wonderful volunteers on every project, regardless of size, and I attribute the success to them.”

In 2011, Ann was nominated for the Women in Municipal Government Leadership Award, which included nominees from all 50 states. It was the first time a person from Tennessee won this award. Currently Ann is second vice president for the Tennessee Municipal League and is in line for the presidency. “This position” says Ann, “has been a wonderful help in understanding issues facing our city and where we can find help for funding initiatives.”

Ann’s retirement from the museum didn’t last long. In 2012, she went back to the museum part-time to help with coordination of the Heritage School and target new programs for building membership and museum attendance. In 2014, she took on the executive director’s role once again, and the museum became more involved in the community than ever before. Ann has been very involved in the Tennessee Association of Museums, serving two years as president. Says Ann, “I had no clue how well that would prepare me for working in City government. I became acquainted with grants, budget management, lobbying, and dealing with the public. The Good Lord put me there for a reason.”

In April, Ann was honored as the American Lung Association’s 2016 Tennessee Woman of Distinction. This award is presented annually at a banquet held at the Chattanooga Convention Center to recognize women who have made extraordinary contributions to their communities and who inspire and encourage others to reach their full potential. Ann has certainly made our community a better place to live in both now and for future generations.